A few years ago, Sony was quickly exiting out of plasma TVs and focusing on LCD TVs. The company wanted a concept that would help introduce the Bravia flat-panel product line strategically and successfully. Research indicated that female buyers prefer thin profile televisions to chunky, oversized models. They like the aesthetics and appreciate the ease of integrating them into their house. In order to support the Bravia launch, Sony advertised in media that focused on home and design and retained style guru Debbie Travis as a celebrity spokesperson. They felt It was important to create a retail environment that women would find appealing because sixty-one percent of women influence household consumer electronic buying decisions.

In comparison to men, women conduct extensive product research before purchasing TVs, whereas men tend to be more impulsive, often leading to buyer’s remorse. Women want to engage with the product, ask questions and seek help from sales associates to ensure they are making the right decision.

Sony asked Red Leaf to design a wall concept for its Bravia product to be deployed in independent retailers. Red Leaf CEO and President Christopher Potter’s first task was to convince Sony to re-think its colour scheme. “Sony’s primary corporate colour was blue and I wanted to create a warmer, more inviting environment, so I proposed a particular shade of red.” 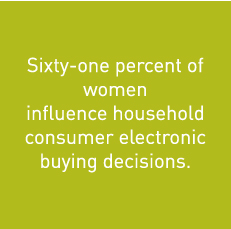 The suggestion received immediate pushback from Sony’s head office in Tokyo, but their Canadian General Manager for TV, a former engineer who hails from Japan, lobbied for Red Leaf’s proposal, and convinced his colleagues to give red a chance.

Red Leaf developed an airy display with attractive lighting and discrete branding which stood out in the dark decors typical of most consumer electronics retailers. “We wanted to accentuate the thinness of the Bravia TVs, so we created a display that presented the TVs without a stand. We made it look like the TVs were floating,” notes Potter.

A few months after the launch, Sony had become the Canadian market share leader in LCD televisions. Not long after, Tokyo called to ask for the specific shade of red used in the Canadian Bravia launch. Shortly thereafter, the global colour for the Bravia line was changed to red. They switched the entire brand based on the Red Leaf wall.

“The ultimate reason we chose that colour was to attract female consumers,” says Potter. “This is a prime example of shopper marketing done right.”

Potter continues, “No matter the industry, whether it’s TVs, cell phones or cars, start with an in-store strategy and continue the program  outside the retail environment. Do not start with a concept that you can’t support in-store. If you’re showing a car spinning around on the salt flats in a TV commercial, that may tweak a consumer’s attention. But at the end of the day, they have to take that car for a drive.”

Did you like this entry?
Here are a few more posts that might be interesting for you.
Related Posts