In 2010, Red Leaf responded to an RFP for RIM’s North American indirect dealer merchandising program for over 6,500 locations. Due to Red Leaf’s competitive pricing and superior design concepts, the company was awarded the project. Red Leaf’s successful partnership with Verizon and its earlier launch of the BlackBerry Storm also played a key role in the selection process.

RIM’s objective was to increase awareness among the 15,000 retail locations where it had minimal brand presence. To take advantage of this opportunity, RIM wanted to provide handsets and exclusive mobile applications, increase accessory sales, and introduce live devices with digital content that would be unique to this type of retail environment. Technology integration was a key component of the final design. 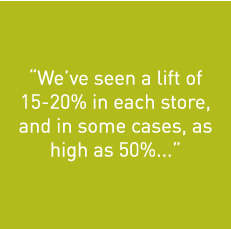 Red Leaf worked with several internal RIM teams from marketing, industrial design and sales to develop a variety of display form factors that would complement many diverse retail environments. The displays also had to be customized for different network carriers, including branded, co-branded and mass-produced displays that presented a consistent brand in all retail locations.

The program launched during the Fall season and was well received, achieving great success for RIM and its retail partners.

“The displays cost upward of $4000 per location,” noted Pat Button, Vice-President, Consumer Sales and Distribution for RIM. “The payback – we’ve seen a lift of 15% to 20% in each store, and in some cases as high as 50%. We’re putting the displays in ‘A’ locations, so on a numeric basis, that’s pretty significant.”

Did you like this entry?
Here are a few more posts that might be interesting for you.
Related Posts